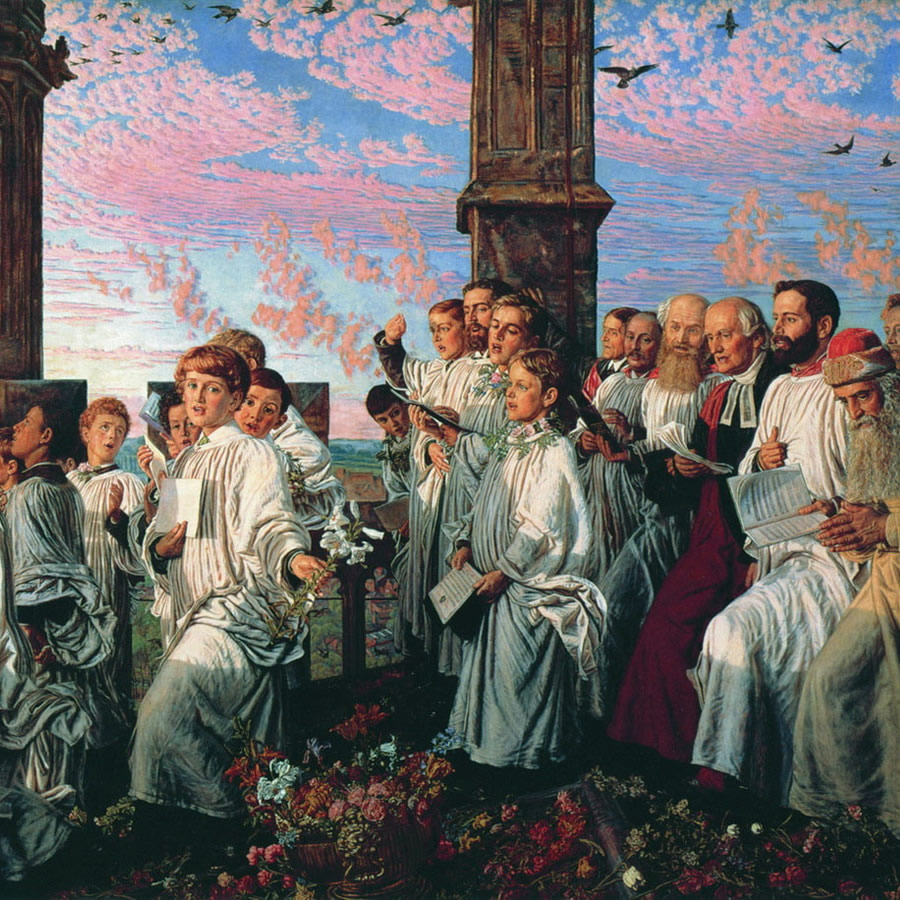 EDITOR’S NOTE: This essay is the coda of a three-part series.
You can read the first part here and the second here.

Another World of Longing

I end my musical-cosmological reflection with a piece of music that depicts the world as a certain kind of music, polyphony. It is Palestrina’s motet, Sicut cervus. Beloved by St. John’s students, the piece is a musical setting of the opening of Psalm 42 in the Vulgate: Sicut cervus desiderat ad fontes aquarum, ita desiderat anima mea ad te, Deus (“As the hart longs for flowing streams, so longs my soul for you, O God”). The motet is a good example of what Nietzsche called Palestrina’s “ineffably sublime sacred music.”1

Every musical composition is both a world unto itself and an image of the world. This is the central proposition of my lecture. The world of Sicut cervus is that of the Bible and the biblical God. Creation, here, is good. It produces beings, not images of intelligible originals or illusory phantasms. The world is not confined to head and heart, to our subjectivity, but is “out there” and solidly real. The God of the Bible is not a craftsman who leaves the world after having made it, or an indifferent prime mover, but the God of promise and history – the God who makes covenants with his people. He is someone to whom one can pray. Salvation comes not from dialectic, or astronomy, or art, or the death of care based on the gnosis of cosmic nothingness, but from faith in God.

Although the words of the motet express longing, the tones do not represent longing as stress and strain. The music is a continually graceful gesture that transmutes the pain of longing into a serene order of voices – voices that seem always to know their place. Sicut cervus is composed in two senses of the word: it is well constructed, and it has an unperturbed disposition. During the piece, motion goes on and time passes, but the overall “feel” seems beyond time and change, like a musical emanation of the nunc stans or eternal Now. It is as if grace were already present, and the singers were experiencing, in the very midst of their yearning, prospective joy in the object for which they yearn. Aquinas cites three criteria of beauty: wholeness, consonance, and radiance or claritas.2 Sicut cervus has these in abundance, especially radiance. The music seems to be suffused with warm light. It is full of feeling but also sounds intelligent, lucid, and self-possessed. The movement is a continuous flow, in imitation of the waters for which the hart thirsts. The tones move, it seems, not because they have to but because they want to, not out of compulsion but out of freedom. The sound is a spontaneous unfolding, as if the four vocal parts are miraculously improvising their lines as they go along, only gradually discovering the perfectly coordinated whole they are in the process of forming. Dissonances occur to enhance consonance and beget motion, but they are not prominent, and the piece as a whole could not be described as a play of forces. Sicut cervus is music without will.

This brings me to the most important respect in which Palestrina’s motet is the image of a world. Sicut cervus is polyphony that lacks (because it does not need) the tonal-harmonic principles at work in the polyphony of Bach. Vertical relations are for the most part the result of simultaneous horizontal relations. The four voices that compose the piece enter one at a time in points of imitation. The voice that follows seems to be inspired to enter by the one that leads. The parts move in obedience to the rules of good voice leading but do more than exhibit formal correctness. They seem to delight in each other’s company and to be naturally social. At times, they even graciously step aside for each other, as if rejoicing in the being and individuality of other lines. Sicut cervus, in its non-urgent flow, is a musical community that captures the sound of friendship. And just as friends engage in all sorts of play, the vocal lines play off one another, often exhibiting contrary motion – simultaneous movement in opposite directions. Thanks to this friendly contrariety, which keeps the parts audibly distinct, the voices celebrate, contrary to what Schopenhauer asserts, the reality and truth of the principle of individuation, as they conspire to form a perfect, natural sounding republic of tones. The voices of Sicut cervus, in this respect, may be said to enact the contrapuntal play that we find among souls in Dante’s Paradiso.

With this non-tragic image of the world, my study in contrast, with its Biblical coda, reaches its end. These two great books, Plato’s Timaeus and Schopenhauer’s World as Will and Representation, differ greatly in how they view being, becoming and the human condition. But they also go together because, more than other great discussions of music with which I am familiar, they invite us to consider that music is more important than even music lovers might think – that music is, to quote Mann, metaphysically significant and captures the whole of all things, not in concept but in image and feeling. Are the cosmologies of Timaeus and Schopenhauer, separately or together, an adequate account of music? I think they are not. There are limits to the hyper-rational Pythagorean approach to music, just as there are limits to Schopenhauer’s Romantic conception of music as representing feeling and irrational will. Both accounts are nevertheless inspired efforts that hit upon certain undeniable truths.

My closing note is inspired by the philosopher Schopenhauer’s personal love of music, which I share. Music, even the saddest music in the world – music that is worlds apart from Sicut cervus and may even be the sound of despair and crushing grief – is dear to us and makes us happy, if only for a while. Maybe this is because music, as a living presence that comes to us, offers itself to us, assures us that we are not alone: that there is something out there in the world that knows our hearts and may even teach us to know them better. Thanks to music, we experience what it means to be connected to the whole of all things, even when that whole seems tragic; what it means to have a soul and not just a mind; to have depth, and not mere rightness, of feeling and being; and, above all, what it means to be open to ourselves and our world through listening.

1 The Birth of Tragedy, 19.
2 Summa Theologica I, 39, 8c. For an excellent discussion of the three formal criteria of beauty, see Umberto Eco, The Aesthetics of Thomas Aquinas, tr. Hugh Gredin, Cambridge: Harvard U. Press, 1988, pp. 64 ff. 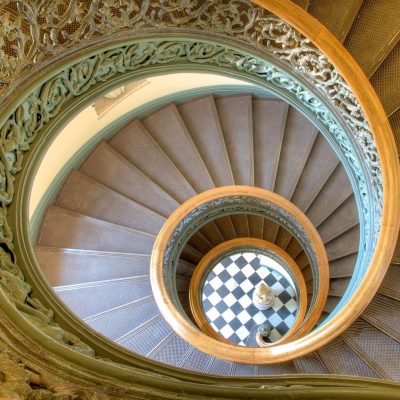 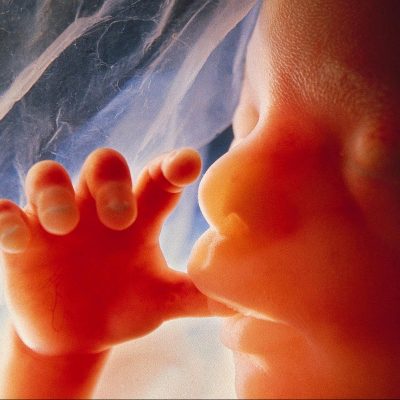 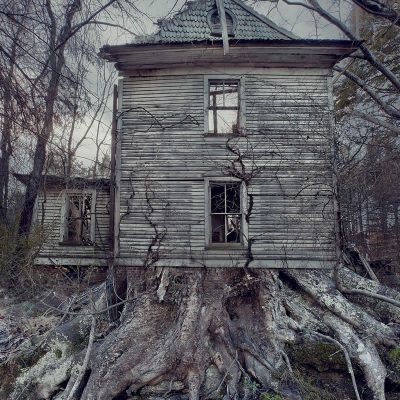 Modernity consists of perversions of notions drawn from Christianity; to be a modern means to be deeply enmeshed in them. 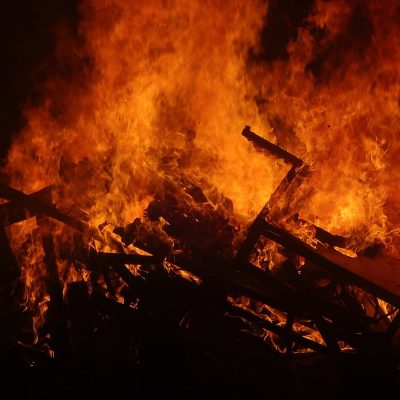 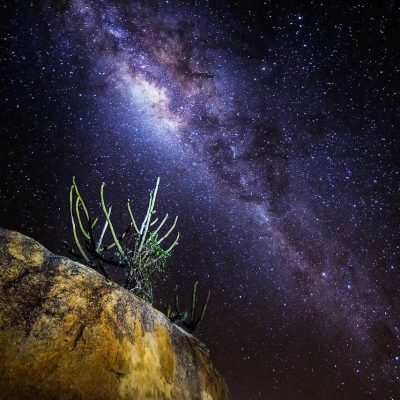 The hero of Robert Reilly’s generous and beautifully written book is beauty.